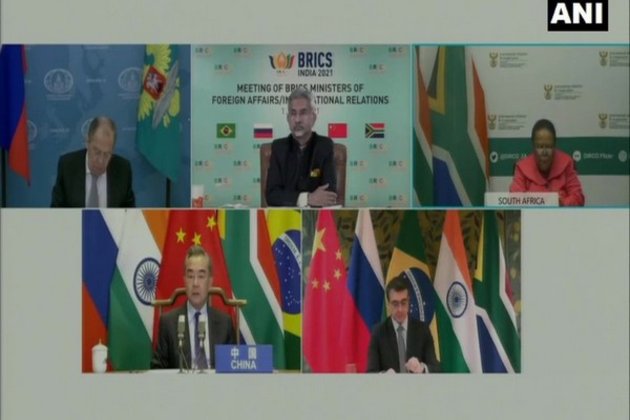 In a statement to the media, the Foreign Ministry (MEA) said the BRICS foreign ministers expressed a firm condemnation of terrorism in all its forms and manifestations when, where and where and by whom they committed it. They recognized the threat of terrorism, the extremism conducive to terrorism, and radicalization.

They decided to fight terrorism in all its forms and manifestations, including cross-border terrorist movements, terrorist financing networks and safe havens.

They reiterated their decision to intensify joint efforts in creating support for the adoption of the Comprehensive Convention on International Terrorism (CCIT), the MEA statement read.

Recalling the BRICS Counter-Terrorism Strategy adopted by BRICS leaders in 2020 and the principles on which the counter-terrorism cooperation of the BRICS countries is based, they reiterated their commitment to finalize a working group results-oriented action plan against terrorism in 2021.

Ministers expressed deep concern over the significant increase in illicit production and trafficking of all kinds of drugs around the world, according to the official statement.

They reaffirmed their commitment to the goals and objectives of the three international drug control conventions. They stressed the importance of promoting cooperation in the field of narcotics control within the BRICS anti-drug working group, as well as in international and regional forums.

Ministers reaffirmed their commitment to promoting international cooperation against corruption and strengthening BRICS collaboration, subject to national legal systems, on issues related to the application of the anti-corruption law, including asset recovery.

Ministers reiterated the need for all countries to cooperate to promote and protect human rights and fundamental freedoms under the principles of equality and mutual respect.

They agreed to continue to treat all human rights, including the right to development, in a fair and equal manner, on the same footing and with the same emphasis.

They agreed to strengthen cooperation on issues of common interest both within the BRICS and in multilateral forums, including the United Nations Human Rights Council, taking into account the need to promote, protect and enforce human rights in a non-discriminatory manner. selective, unpoliticized and constructive. and without double standards, read the statement.

In addition, ministers also reiterated the need to resolve the nuclear issue of Iran by peaceful and diplomatic means in accordance with international law, including negotiations under the Joint Comprehensive Plan of Action (JCPOA), and the importance of the full implementation of the JCPOA and UNSCR 2231, the statement said.

The Nuclear Agreement on Iran, formally known as the Joint Comprehensive Action Plan (JCPOA), is an agreement on the Iranian nuclear program reached in Vienna on July 14, 2015, between Iran and the P51 five permanent members of the United Nations Security Council). China, France, Russia, United Kingdom, United States, plus Germany).

The Nuclear Treaty on Iran has often been in the news from time to time, focusing mainly on the icy relationship between Iran and the United States.

Although the Nuclear Agreement on Iran came to a standstill under US President Trump in 2018, new President Joe Biden has expressed interest in reviving the JCPOA following an announcement in May 2021.

The agreement with Iran was approved by UN Security Council Resolution 2231, which was adopted on July 20, 2015, and major international companies rushed to do business with Iran almost immediately.

They were commended for extending the “technical expertise” between Iran and the IAEA that would allow the necessary verification and control activities to continue.

Ministers called for continued efforts to strengthen the system of arms control, disarmament and non-proliferation treaties and agreements and preserve their integrity to maintain global stability and international peace and security, and further stressed the need for to maintain effectiveness and efficiency also as a nature based on the consensus of relevant multilateral instruments in the field of disarmament, non-proliferation and arms control, the statement read. (ANI)

The idea of companies being ‘born in the cloud’ has become popularised in recent years. … END_OF_DOCUMENT_TOKEN_TO_BE_REPLACED

The accelerated adoption of digital transformation in the Middle East has increased the risk factor of cyberattacks. Here are some of the executives … END_OF_DOCUMENT_TOKEN_TO_BE_REPLACED

SINGAPORE (THE BUSINESS TIMES) - Temasek on Tuesday (Aug 10) launched an offering of 50-year Singapore dollar bonds, following a recent round of US … END_OF_DOCUMENT_TOKEN_TO_BE_REPLACED

Facebook has officially launched Live Audio Rooms and podcasts for users in the U.S. These features will initially be available to select public … END_OF_DOCUMENT_TOKEN_TO_BE_REPLACED