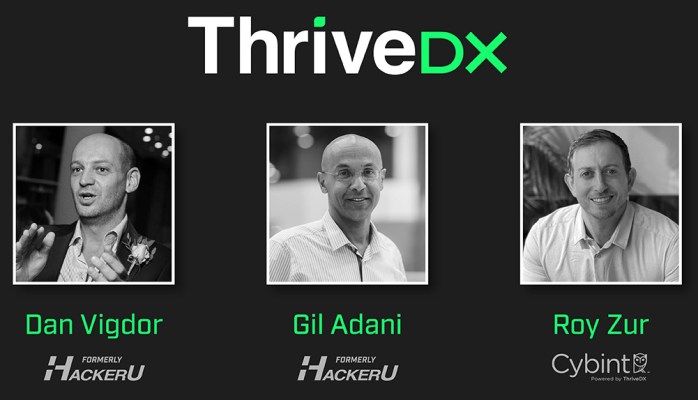 Florida-based HackerU, which creates cybersecurity and other digital skills programs, is acquiring Cybint, a SaaS-based cyber education company. TechCrunch sources understand this to be a $50 million acquisition, though both companies declined to comment on the price.

HackerU provided digital workforce training to students, post-graduate professionals and the community in the U.S., Europe and Asia through partnerships with universities. The acquisition will mean the combined entity’s geographic footprint will now increase, and it will now rebrand as ThriveDX, standing for “digital transformation.”

Cybint had previously raised $7.5 million thus far. HackerU has been around for 15 years and in the past four years raised around $100 million from Prytek, as well as Liquidity Capital and Shintilla Cap. The company had a number of global initiatives including a partnership with Southern New Hampshire University, where it created boot camps training cybersecurity skills and preparing Black and refugee students based in southeast Africa through remote training for long-term job opportunities.

ThriveDX’s main competitor will be 2U, which acquired Trilogy in 2019 for $750 million.

In a statement, Dan Vigdor, co-founder and executive chairman of HackerU said: “The combination of our two companies’ positions the new ThriveDX group as the category leader worldwide and solidifies our ability to reskill and upskill individuals at any stage of their professional life.”

Both rising incidences of cybersecurity breaches and the switch to remote working means the cyber world is booming right now — but there is a huge shortage of staff. According to ISC2, some 3.1 million cybersecurity vacancies were left unfilled in 2020, with 63% of corporations reporting their employees are underqualified in cybersecurity.

Vigdor added: “The pandemic accelerated a huge transformation across the global workforce, leaving companies in dire need of workers with specific skills — and job candidates in need of training.”

Roy Zur, founder and CEO of Cybint said: “The Cybint team will support HackerU by signing additional partnerships and accelerating the development of software as a service (SaaS) training solutions with a strong emphasis on corporate training and cybersecurity education solutions globally.”

The idea of companies being ‘born in the cloud’ has become popularised in recent years. … END_OF_DOCUMENT_TOKEN_TO_BE_REPLACED

The accelerated adoption of digital transformation in the Middle East has increased the risk factor of cyberattacks. Here are some of the executives … END_OF_DOCUMENT_TOKEN_TO_BE_REPLACED

SINGAPORE (THE BUSINESS TIMES) - Temasek on Tuesday (Aug 10) launched an offering of 50-year Singapore dollar bonds, following a recent round of US … END_OF_DOCUMENT_TOKEN_TO_BE_REPLACED

Facebook has officially launched Live Audio Rooms and podcasts for users in the U.S. These features will initially be available to select public … END_OF_DOCUMENT_TOKEN_TO_BE_REPLACED