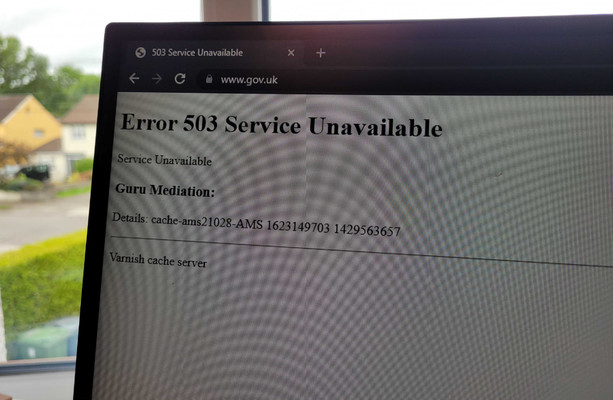 A NUMBER OF media and government websites are live again after they stopped working this morning in an outage that affected sites across several countries.

Amazon, Reddit and Pinterest experienced outages along with news sites including the Irish Times, BBC and the Guardian, which are now accessible again.

The outage appeared to have been sparked by an issue with a content delivery network (CDN), a system used to host websites and their content on the internet and serve it to users.

The Guardian’s UK Technology Editor Alex Hern shared updates on the website’s status on Twitter, which has now been converted to a liveblog on the Guardian site.

And *exhale*. This liveblog is over – I’m going to switch over to our actual website, and focus on updating our story on this whole farrago, which has just gone live: https://t.co/7cr27oDL7M

Fastly, one of the world’s major CDNs, reported a major outage across its global network, which is believed to have caused the outage.

The company offers services such as speeding up loading times for websites, protect them from denial-of-service cyberattacks and helping them deal with bursts of traffic in order to stay online and stable.

The US-firm said the “issue has been identified and a fix is being implemented” at 11.44am Irish time.

It added just before midday: “The issue has been identified and a fix has been applied. Customers may experience increased origin load as global services return.”

We identified a service configuration that triggered disruptions across our POPs globally and have disabled that configuration. Our global network is coming back online. Continued status is available at https://t.co/RIQWX0LWwl

Fastly’s clients include Deliveroo, Pinterest and Shazam, and its turnover last year was $291 million.

Companies like Fastly and its competitor Cloudflare handle huge amounts of internet traffic every day, playing an important if not widely known role in global internet access.

Some outlets found creative ways of continuing to deliver news while their sites were down.

No news is bad news
Support The Journal

The Verge, a US technology news site, published an article through Google Docs while its website couldn’t be reached.

Vast chunks of the internet are offline, including The Verge. Until we’re back, we’re reporting to you live out of Google Docs. Here’s what we know so far about the outage: https://t.co/4b1p2qhYif

Messages such as “Error 503 Service Unavailable” and “connection failure” were seen on websites for a range of organisations, including CNN, the Financial Times, The Guardian, France’s Le Monde newspaper, Italy’s Corriere delle Serra and Spanish daily El Mundo as well as social and entertainment site Reddit.

The White House and gov.uk websites had error messages but became available again later, as did the the BBC, the New York Times and other news outlets.

A number of websites were down in the Nordic region, including Swedish newspapers Aftonbladet and Svenska Dagbladet, news aggregator site Omni, and Swedish social security service Forsakringskassan. In Denmark, TV2.dk’s website was down before returning.

CALIFORNIA CITY — California City’s computers at City Hall were hit with a ransomware attack last month which shut down many functions, including … END_OF_DOCUMENT_TOKEN_TO_BE_REPLACED

Commentary The Department of Homeland Security has declared the United States has 16 “critical infrastructure sectors.” Translated, that means these … END_OF_DOCUMENT_TOKEN_TO_BE_REPLACED

The Columbia Police Department, through its self-reporting of data on vehicle stops to the Missouri Attorney General's Office, found while the city's … END_OF_DOCUMENT_TOKEN_TO_BE_REPLACED

Cybersecurity is no longer solely the duty of IT experts who are positioning firewalls and backup servers. It mandates top-to-bottom dedication and a … END_OF_DOCUMENT_TOKEN_TO_BE_REPLACED