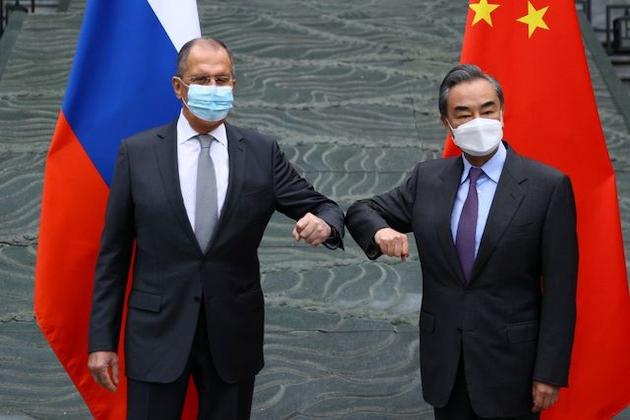 BEIJING, China: In a reprimand to the United States and other Western countries, Chinese and Russian foreign ministers met on Tuesday to reaffirm their countries’ close ties, denouncing criticism of human rights abuses in their countries. countries.

China’s Wang Yi and Russia’s Sergei Lavrov have rejected external criticism of their authoritarian political systems, saying their countries are working on international issues, such as climate change and the coronavirus pandemic.

Meeting in the Chinese city of Nanning, Wang and Lavrov said the United States was interfering in the affairs of other countries, while urging the U.S. to rejoin Iran’s nuclear deal.

During a press conference on Tuesday, Wang criticized the ongoing coordinated sanctions by the European Union, Britain, Canada and the United States against Chinese officials for human rights violations in the Chinese region of the far west of China. Xinjiang.

“Countries should remain united to oppose all forms of unilateral sanctions,” Wang said, the Associated Press reported. “These measures will not be taken by the international community.”

Russia’s Lavrov noted that Western sanctions brought China and Russia together, accusing the West of “imposing its own rules on everyone, who they believe should uphold world order.”

“If Europe broke off these relations, simply by destroying all the mechanisms created over many years … probably, objectively, this will lead to our relations with China developing more quickly than the rest of the relations with European countries, “Lavrov said.

The West imposed sanctions on China after the imprisonment of up to a million Uyghurs and other Xinjiang Muslim minority groups in special camps.

China claims that these people have voluntarily participated in job training and radicalization courses.

Confidential computing is needed for AI and also for AI-based self-driving cars. getty Let’s play a spying game. A friend of yours wants to … END_OF_DOCUMENT_TOKEN_TO_BE_REPLACED

If you are looking to buy a new laptop, then here’s a deal for you. Amazon has listed Samsung Galaxy Book Pro laptop with 12% off on its website. As … END_OF_DOCUMENT_TOKEN_TO_BE_REPLACED

Cloud-based solutions are likely to be at the centre of asset managers’ increased IT investment over the next 12 months, according to recent research … END_OF_DOCUMENT_TOKEN_TO_BE_REPLACED

ANDOVER, Mass., June 16, 2021 /PRNewswire/ -- Navisite announced today an expansion of its cybersecurity services to include a Virtual Chief … END_OF_DOCUMENT_TOKEN_TO_BE_REPLACED